The installation and maintenance of globe valves 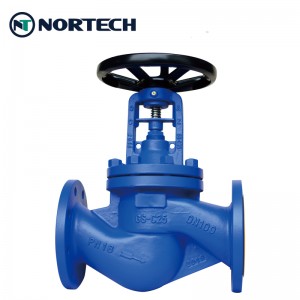 Globe valve in operation, all kinds of valve parts should be complete and intact. Bolts on the flange and bracket are indispensable. Thread should be intact and no loosening is allowed. Fastening nut on handwheel, if found loose should be tightened in time, so as not to wear the connection or lose the handwheel and nameplate. If the handwheel of the globe valve is lost, the adjustable spanner is not allowed to be used instead and should be equipped in time. The packing gland is not allowed to skew or have no preload clearance. Protective cover should be installed on the stem of the globe valve in the environment that is easily contaminated by rain, snow, dust, sand and other dirt. The gauge on the globe valve shall be complete, accurate and clear. The seal, cap and pneumatic accessories of the globe valve should be complete and intact. Do not knock, stand or support heavy objects on the globe valve in operation; Non-metallic valves and cast iron valve, in particular, more will stop valve on the maintenance work in production welding production before and after the valve professional maintenance, for the valve in the service of production operations plays a vital role, orderly and effective maintenance will protect right valve, valve to function properly, and prolong the service life of the valve. Valve maintenance may seem simple, but it is not. There are often overlooked aspects of work.
First, when the globe valve is greasing, the problem of grease injection is often ignored. After grease filling, the operator chooses the valve and grease connection mode and carries out grease filling operation. There are two situations: on the one hand, the amount of fat injection is less, and the sealing surface is worn faster because of the lack of lubricant. On the other hand, excessive injection of fat, resulting in waste. There is no accurate calculation of the sealing capacity of different globe valves according to the type and category of valves. The sealing capacity can be calculated by the size and category of the cut-off valve, and then a reasonable amount of grease is injected.
Second, the problem of pressure is often ignored when the globe valve is greasing. During the grease injection operation, the grease injection pressure changes regularly with peaks and valleys. The pressure is too low, the seal leaks or fails, the pressure is too high, the grease mouth is blocked, the grease in the seal is hardened or the sealing ring is locked with the valve ball and the valve plate. Usually, when the grease pressure is too low, the injected grease flows into the bottom of the valve chamber, which generally occurs in small smelling valves. And the grease pressure is too high, on the one hand, check the grease nozzle, and replace it if the fat hole is blocked; On the other hand is the lipid hardening, to use the cleaning fluid, repeatedly soften the failure of the sealing grease, and inject new grease replacement. In addition, the sealing type and sealing material also affect the grease pressure. Different sealing forms have different grease pressure. In general, the grease pressure of hard seal is higher than that of soft seal. Ball reading maintenance is generally in the open state, special circumstances choose to close maintenance. Other valves can not be all to open position. The gate valve must be closed during maintenance to ensure that the grease is filled with sealing groove along the sealing ring. If it is open, the sealing grease will fall directly into the flow channel or valve chamber, causing waste.