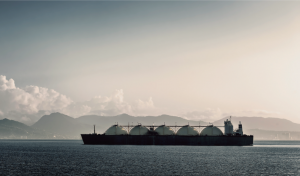 Until now, cryogenic application scenarios requiring two-way valve sealing have mainly used two types of valves, namely globe valves and fixed ball valves/top mounted fixed ball valves. However, with the successful development of the two-way cryogenic ball valve, system designers have obtained a more attractive option than traditional ball valves-floating ball valves. It has a higher flow rate, has no restriction on the flow direction and sealing direction of the medium, and can operate safely in cryogenic conditions. And the size is smaller, the weight is lighter, and the structure is simpler.
Cryogenic application scenarios that require valves include the inlet/outlet of storage tanks for filling and discharging, pressurizing closed empty pipelines, gasification and liquefaction, multi-purpose pipelines for various systems in LNG terminal stations, shipping systems, and tankers , Distribution systems, pumping stations and LNG fuel filling stations, as well as natural gas valve sets (GVUs) related to dual-fuel engines on ships. 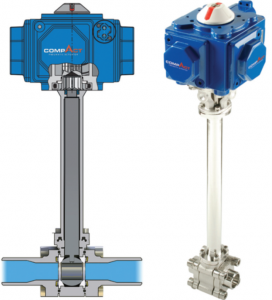 In the above-mentioned application scenarios, two-way shut-off valves are generally used to control and shut off the medium fluid. Compared with alternative types such as ball valves, they have several problems:
The flow coefficient (Cv) is low-this will affect the selection of all relevant pipe sizes and will become a potential bottleneck restricting the system’s flow capacity.
· Need to configure linear actuators to perform closing and control functions-compared with the rectangular rotary actuators used to control and operate ball valves and other rectangular rotary valves, this type of equipment has a more complex structure and is expensive. The cost and structural complexity of a complete set of valve and actuator equipment are very prominent.
· If the shut-off valve is used to realize the emergency shutdown function required by many LNG systems, the complexity will be even higher.
For small LNG facilities (SSLNG), the above problems will be more obvious, because these systems must be smaller, more cost-effective, and have the largest flow capacity in order to shorten the loading and unloading cycle.
The flow coefficient of the ball valve is higher than that of the globe valve of the same size. In other words, they are smaller in size without affecting the flow rate. This means that the size, weight and cost of the entire piping system and even the entire system are significantly reduced. At the same time, it can significantly increase the return on investment (ROI) of related systems.
Of course, standard cryogenic float ball valves are one-way, which is not suitable for the above-mentioned scenarios that require two-way valve sealing. 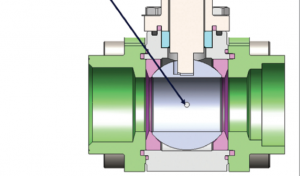 One-way Vs Two-way
As shown in Figure 1, the standard floating ball valve for cryogenic conditions has a pressure relief hole on the upstream side of the valve ball to prevent the pressure from accumulating and rising when the medium undergoes a phase change. When the valve is in the closed position, the liquefied natural gas enclosed in the cavity of the valve body will begin to evaporate and expand, and the volume can reach 600 times the original volume after being fully expanded, which may cause the valve to burst. In order to prevent this situation, most standard float ball valves have adopted an upstream opening pressure relief mechanism. Because of this, traditional ball valves cannot be used in situations that require two-way sealing.
And this is the stage where the two-way cryogenic float ball valve can show its talents. The difference between this valve and the standard one-way cryogenic valve is:
· There is no opening on the valve ball to relieve pressure
· It can seal fluid in both directions
In the two-way cryogenic float ball valve, the two-way spring-loaded valve seat replaces the upstream opening pressure relief mechanism. The spring-loaded valve seat can release the excessive pressure generated by the liquefied natural gas enclosed in the cavity of the valve body, thereby preventing the valve from bursting, as shown in Figure 2.
In addition, the spring-loaded valve seat helps to keep the valve at a lower torque and achieve smoother operation in cryogenic conditions.
The two-way cryogenic float ball valve is equipped with a second-stage graphite sealing ring, so that the valve has a fire safety function. Unless a catastrophic accident causes the polymer parts of the valve to burn, the secondary seal will not come into contact with the medium. In the event of an accident, the second-level seal will achieve the function of fire safety protection.
Advantages of two-way valves
Compared with globe valves, fixed and top-mounted fixed ball valves, the two-way cryogenic float ball valve has all the advantages of a high flow coefficient ball valve, and there is no restriction on the fluid and sealing direction. It can be used safely in cryogenic conditions; the size is relatively small and the structure is relatively simple. The matching actuator is also relatively simple (right-angle rotation) and miniaturized. These advantages mean that the entire system is smaller, lighter, and more cost-effective.
Table 1 compares the two-way cryogenic floating ball valve with other valves with similar functions from the perspectives of maintenance, size, weight, torque level, control difficulty, and overall cost, and comprehensively summarizes its advantages and disadvantages.
If a small LNG facility breaks the convention and adopts a two-way cryogenic ball valve, it can give full play to the unique advantages of the ball valve, that is, full diameter, high flow rate and high pipeline discharge rate. Relatively speaking, it can support smaller size pipes while maintaining the same flow rate, so it can reduce the total volume, weight, and complexity of the system, and can also reduce the cost of the piping system.
The previous article introduced the advantages of being used as a shut-off valve. If used as a control valve, the advantages will be more obvious. If the right-angle rotary ball valve is used, the complexity of the valve automation kit will be significantly reduced, so it has become an optional item for the cryogenic system.
The most basic content of the above-mentioned automation kit is the simple and practical two-way cryogenic float ball valve, and the rectangular rotary actuator with simple structure and high cost efficiency. 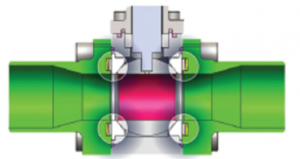 In short, the two-way cryogenic float ball valve has a “subversive” positive significance for the cryogenic pipeline system. In small LNG facilities, it can give full play to its advantages.
In the past few years, this new product has been verified in practical applications, proving that it is of positive significance for the project cost and the long-term reliable operation of the system.
Post time: Jun-17-2021